I’ve uninstalled previous version (also VirtualBox), downloaded latest versions and Local 5.2.3 can’t open Open/Save dialogs (i.e. to choose where to store a site or save an export, or on the Preferences you can’t select a Default Sites Location. I’ll try downloading 5.2.1 and check if it works, or keep downgrading until it works.

5.2.7 brought back the not opening Open/Save dialogs on MacOS Mojave.

This might be related to the version of Electron we’re using. I’ll make a note for the team to look into this.

Hello @clay thank you for your reply.

The most concerning issues are, in this order:

Thank you for keeping alive the interest on your users. Cheers!

Hey @clay thanks again for your reply!

Yup, they should as long as you don’t have any other local web servers running.

One thing worth noting, if you are on Windows, sometimes other hidden Windows features like IIS or even VMWare Workstation can cause port conflicts on ports 80 and 443.

Hey @clay thanks again for your prompt reply.

I use Mac OS Mojave and I have no other Apache service running, but if you tell me commands I can kill proccesses on the Mac OS so it may work. But a working version of Local should kill these proccesses by itself, doesn’t?

, sorry I should’ve realized that you were using macOS based on the thread title!

On that note, if you open up Terminal and run sudo lsof -i :80 | grep LISTEN, it should show processes on port 80.

I’ve just installed, but still can’t use Local Domains. As localhost doesn’t use HTTPS and not even a domain, it’s pretty much useless for any WordPress site development. It may work for plugin developers (wich I also question). The site should be accesible as it was on Local by Flywheel…

Here’s what I got:

Aren’t those from Local Beta?

Best way to check is with Local off. Then if something exists it’s not from Local.

If so, the following command should disable it:

After unloading MacOS HTTPD, Local beta 5.5.0 is working. But now, instead of loading the site, it just shows a 502 error screen: 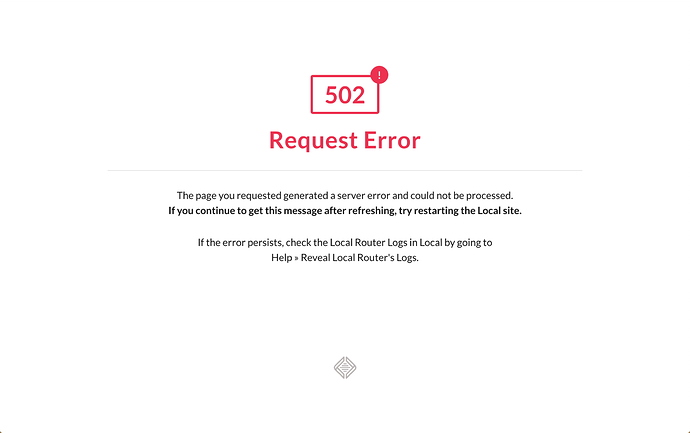 Anyway I assume that Local should run the HTTPD Unload command for the user. A message with a button to allow it would suffice, I assume.

It stills tries to load the site with a “?cache-buster=1877” appended to the URL, but if I remove it and add https:// it just works. With Apache.

It seems like you’ve reached the Holly Graal buddy! I’m so happy!

Some bugs may arise, but I’m now ready to get rid of 3.x and VBox.